A downloadable game for Windows, macOS, and Linux

You are one of the top Friendship Sleuths in the city. Solicitations for your acquaintance are numerous in quantity. Compensation, immaculate. It is a balmy summer evening.

You are feeling particularly amicable tonight.

Walking into a city on an alien planet you've never been to before isn't a good way of getting your memories back, though. But maybe all your new yet strangely familiar friends can help with that...?

Befriendus: A Beforus Befriending Adventure is our answer to Homestuck's lack of alpha troll content as of late. Chat it up with some familiar faces from before you knew them! Learn things about them previously unseen and unexplored! Do you have a higher purpose in life than making friends with a bunch of obscure and forgotten Homestuck characters? Hell if anyone knows, but that's what's happening so buckle up, folks. 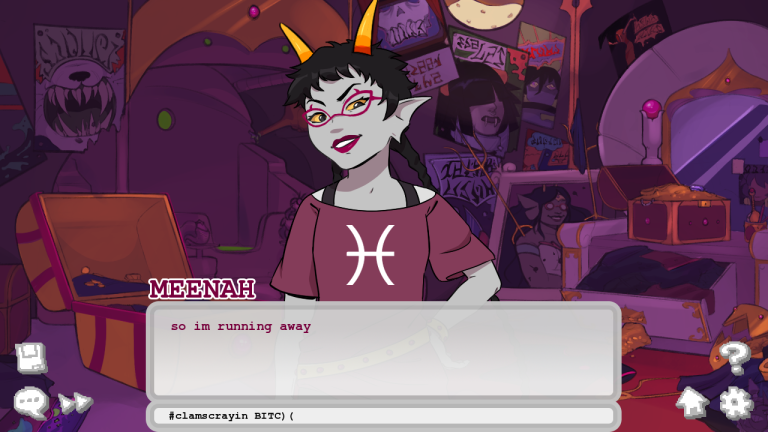 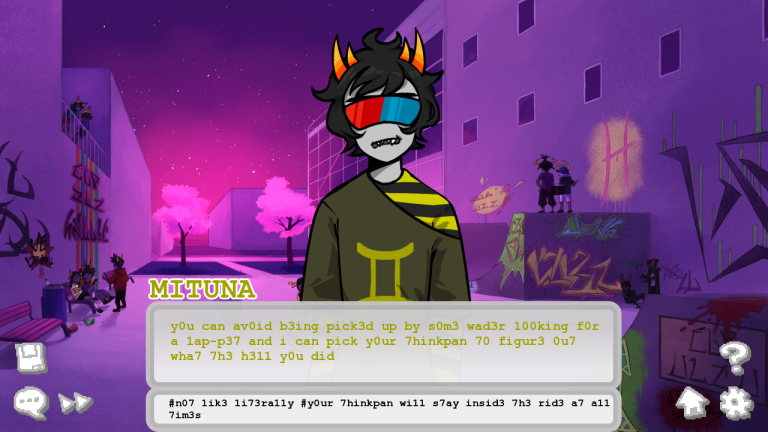 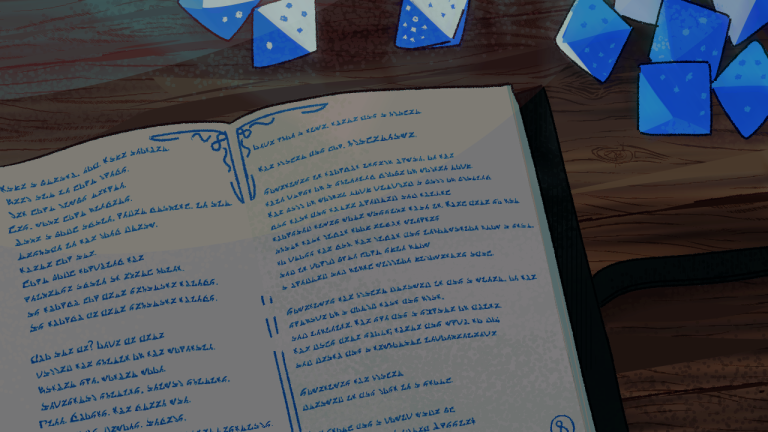 INTERMISSION 2: "A CULLED SHOULDER" OUT NOW!

(This is a Homestuck fangame, heavily inspired by Hiveswap: Friendship Simulator and Pesterquest. Please support the creators of the original works!)

Here's a Google Doc containing all the information you could need about the game, like transcripts and Easter eggs.

*I'm not saying there's a secret volume hidden somewhere but

Starting with upd8 2, Befriendus connects to the internet to periodically check for updates and track how certain features are used. No personal data is ever collected, but you can disable these features in the settings menu if you'd like (set "Updates & Stats" to false).

I hope this is still in development if any devs are here.

still workin' on it

I've played through the current characters and the intermissions and I'm absolutely in love with this game! and I can't wait for the other characters! I love this game a lot and it's probably one of my favorites!!

Just played through what's avaliable and I love it so far :3! I tried joining a tier on the Sponsus page but it only comes up with "This user has not linked a stripe account to Sponsus, please ask them to do so!", anyone know a fix for that?

Thank you so much! We've temporarily deactivated our Sponsus tiering while we were on hiatus, it should be coming back up later this month.

I have returned! Sorry to say that it took me until now to reinstall the program and take a look at Intermission 2 and the chapter of the journal afterward. Wonderful stuff, kudos on the messager look for I-2's conversation especially! After clearing out some space on my computer, the program that is used to update the game seems to be working too. I hope this project is still going strong and that I can see another installment in the foreseeable future!

New content is still in the works! Thank you for your interest, we hope to get new chapters out ASAP.

This is such a well made game, Also I could listen to Aranea talk forever with such cute sprites, awesome music as well I was really sad when I got to the end because I was having so much fun!

im worried becuase when i downloaded the update ftom the game itself windows defender detected that Program:Win32/Uwamson.A!ml was on my pc

Yeah, antivirus doesn't like what we've put in place for the automatic update system. We have a fix in place for this that will take effect next update.

Something seems to be wrong. After a day and a BSoD(oof) I opened Befriendus to finish it but... the game window immediately closed itself and the .exe wouldn't launch, suggesting it has been misplaced from the lib, though even after placing it in the right folder it would not open. After a redownload the file now instead deleted itself no matter which I launch, the one in the main folder or in the lib. Help? What is happening?

Edit: the problem seems to have solved itself when I deleted the update folder

This is an issue with antivirus. We have a fix for that for next update. Thanks for letting us know!

hi honestly i really love this game so much and i was wondering if you needed any extra artists or writers to make talk sprites or write dialog for up coming chapters? If so id be happy to do so (obviously free of charge) id just love to be part of this game creation. if you do want an extra helper just shoot me an email at jupiters.starchild@gmail.com

Hi there, thank you so much for the offer! Unfortunately we're pretty full-up on both, I don't foresee any positions opening in the future.

I'm confused - I did all of Aranea's routes as far as choices go and did the ending for fast-forwarding. What am I missing for my last little Aranea-related achievement?

Have you picked up the journal from Meenah's route? Take a look around Aranea's choices again if you have, you might find a sneaky lil something.

To be more specific, I'm missing Bad End 2. And my previously-acquired notes were unlocked from the get-go for this new download, but to be sure, I sped through all of Meenah's routes too. Then I ran through all the options with Aranea again but I didn't notice any changes.

I don't want to go into too much detail here in the comments but I have compiled a guide in our Google Doc that you can check out for more explicit details (spoiler warning, obviously).

Sorry it took so long to look here and get back to this, but in the end I suppose that was only to my own detriment, lol. I appreciate the guide and that you couldn't get too detailed. Thanks, and have a great holiday

Oh my god, Aranea was annoying. Having to set up an autoclicker instead of just being able to fast forward really tested my patience.

It's everyfin I wished for and more.

This is one of the best game's I've played in a LONG time, 'speshelly with the new update. Or rather, Upd8. Seariously though, this is super good! Hope it updates  soon.

In the secret route, a section of the text says "whiny" instead of what I presume is supposed to be "whinny".

Thanks for the catch! Fixing now

Thank you for the update, and I hope the automatic system for the next one goes smoother! I can't wait to see which Dancestors are next.

is there some way I can tip yall? this is great

Consider donating on our Sponsus page! There's a "one time donation" button and everything's split equally across the whole team. Thanks so much!

i cannot play on chromebook im very sad about it :(

the art and writing in this game are amazing!! spectacular work!! im really enjoying this so far and OOMGH i love all the sprites...esp mitunas sprite....muah gorgeous chefs kiss

amazing job to all the people who contributed to this game!! its amazing and u are all doing a phenomenal job! i adore this soooo much if only i could spam heart emojis

If Aranea's route doesn't include Elevatorstuck at some point, I'm going to be sad.

lovely game !!! i really love mituna's route sm thank u for giving depth to his character :D and all of meenah's fish puns are to die for hahaha

I have to say Mituna's route was something that really hit me and may be my favorite of the two. However both routes were great and I can't wait for the next volume, please take all the time you need though!

Mituna's route had me tearing up a bit omg. And Meenah made me so happy, she's so in character while feeling like this is something brand new, this is so good!!

Only 2 routes are out and im obsessed. Meenah is delightfully mean and Mituna's route just came for my ass like it's no big deal like. rude. Looking forward to future volumes :D !
ps: i keep rereading the journal entries to figure out the characters, it's such a cool addition, keep it the fuck up yo 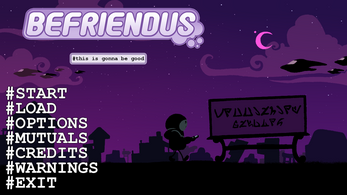 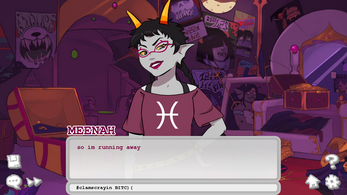 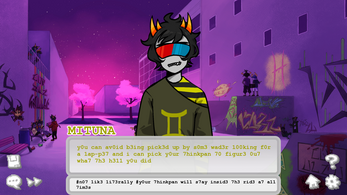